Neurosurgeon with a Heart, Mind and Soul 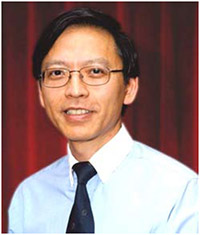 He is currently Co-ordinator of the Mount Alvernia Brain Centre, a Catholic hospital (Newspaper 1) and was formerly Director of the Vascular Programme atNational Neuroscience Institute. He was the Head of Neurosurgical Division, National University Hospital from 1990-2002 and was professor at the National University of Singapore for many years.

He was born in Hong Kong in 1957. At the age of 18,he went to Australia to study and matriculated with 6A’s including 4 special distinctions. He graduated with honours in both medicine and surgery from the University of Melbourne in 1981. He did his general surgical training in Singapore and obtained his FRCS (Edinburgh) in 1986and joined National University of Singapore as faculty staff in 1987. From 1987-1990 he was sent to Oxford for neurosurgical training. Upon return to Singapore, he formed and headed the Division of Neurosurgery at the National University Hospital (NUH) from 1990 to 2002when he went into private practice. He was the first Associate Professor in Neurosurgery of the university.

He has published more than 100 journal and conference papers. The journal papers were mostly in international journals, including a first author publication in Lancet,one of the top medical journals in the world.

He has been invited to operate in Indonesia (Jakarta,Surabaya and Medan), Vietnam (Ho Chi Minh City),China (Shanghai) and New Zealand (Christchurch). He has organized several workshops for training of younger neurosurgeons (Newspaper 2) and received the “Star Award” and “Lend a Helping Hand Award” from NUH.

He has a special interest in brain tumour, stroke,pediatric tumour and spine problems, including low back and neck pain. He works with a team of Neurologists, Interventional Neuro-radiologists, Neuro-anesthetists, Spinal Orthopedic Surgeons,Neuro-otolaryngologists and Rehabilitation Physicians, including Physiotherapists, Occupational Therapists, Speech Therapists and Dietitians. All of the specialists are formerly consultants or senior consultants in government hospitals in Singapore.

Where appropriate, the latest technologies are used to treat brain and spine diseases. These include state-of-the-art Microsurgery, Computer Guided brain and Spinal Navigation (StealthStationS7), Endoscopy(Karl Storz), Intra-operative Brain and Spinal monitoring (SSEP, MEP from Medtronic), Ultrasonic Aspirator and Imaging (Aloha). These maximise thesafety and efficiency of the operations.

He is married with 2 children. His hobbies include singing(Newspaper 3) and giving health talks in churches. He obtained a Diploma in Singing with distinction from the Trinity College (London) in 2008.