Brain tumours can be divided into 2 groups:

A huge meningioma involving both right and left sides of the brain was completely removed.

This tumour grows on the covering of the brain (meninges). Usually it grows slowly but occasionally it can grow
faster than expected. It may produce symptoms of

1) Headache. This type of headache sometimes occurs at night or early morning, waking the patient up.
2) Epilepsy. An epileptic fit may be the first symptom the patient experiences.
3) Weakness, numbness or blurred vision, depending on the location of the tumour. Complete removal of the tumour gives long term cure (Testimonial 2, Ordinary complaints, Tan Pao Suang 54 year old Medan). 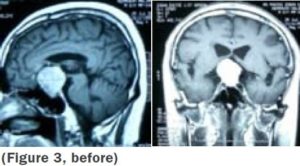 A large non-secreting pituitary macroadenoma before and after operation.

a. Convexity: this is the easiest type of meningioma to remove. I call this ‘trainee meningioma”. Removal is usually easy by first cutting off the blood supply to the tumour by cutting the dura around the tumour before removal. Computer localisation is useful to guide the skin and bone cut. It is not near or attached to important nerve or blood vessels.

b. Parasagittal meningioma: some of these tumours can grow to huge size before symptoms appear. The important issue with this type of tumour is sometimes it may involve a major vein of the brain, superior sagittal sinus. Small residual tumour inside the superior sagittal sinus may need post-operative radiotherapy.

Olfactory groove meningioma is near the surface and therefore quite easily accessible. Nevertheless occasionally it may erode or invade the skull base bone making complete removal difficult. Small remnant tumour may be treated with Gamma Knife (a type of single dose computer guided radiotherapy).

Tuberculum meningioma often presents with visual problem. It may involve some arteries at the back of the tumour (anterior cerebral arteries) and surgeon needs to be very careful not to injure these arteries or else stroke may result. Most of the time it is possible to completely remove such tumours.

The bone called sphenoidal wing forms the boundary of the middle cranial fossa (middle part of the skull). Meningiomas arising from this region may be near the surface (lateral one third of sphenoidal wing), which makes it easy to remove. Or it may arise near the middle of the brain (medial one third of the sphenoidal wing) making it impossible to completely remove because of involvement of an important artery (internal carotid artery). When it arises in the middle of the brain involving the artery as well as important nerves and vein (cavernous sinus meningioma), surgery cannot be done but the tumour often can be treated with radiotherapy.

Brain tumours can be divided into 2 groups:

This tumour grows on the covering of the brain (meninges). Usually it grows slowly but occasionally it can grow faster than expected. It may produce symptoms of

1) Headache. This type of headache sometimes occurs at night or early morning, waking the patient up. Coughing, sneezing and straining in toilet may aggregate the headache

2) Epilepsy. An epileptic fit may be the first symptom the patient experiences.

3) Neurological problems such as weakness, numbness of the arms or legs or blurred vision, depending on the location of the tumour. The patient may complain of walking difficulty.

MRI scans is necessary to see the tumour clearly. For computer guided (stereotactic) surgery, a detailed (fine cut) is needed for the computer to reconstruct a 3-D model of the tumour.

Complete removal of the tumour gives long term cure (Testimonial 2, Ordinary complaints, Tan Pao Suang 54 year old Medan). Sometimes if the tumour has a lot of blood supply to the tumour (vascular), a pre-operative embolization of the tumour (injection of particles to block off the feeding arteries to the tumour) can make the surgery smoother and less risky.

Before surgery, often the patient needs to be started an anti-epileptic medication as epilepsy may occur after any brain surgery due to irritation of the brain due to the tumour or surgical manipulation. If there is brain swelling before surgery causing much pressure effect, steroid (dexamethasone) needs to be given to reduce the swelling first before surgery. With steroid, the patient’s symptoms often improve but this is not a permanent solution as steroid cannot reduce the tumour.

Should further advice be required, we are always glad to help. Please contact us here to make an appointment.

This tumour arises from the pituitary gland, a hormone gland which controls most of the hormones in the body. It may produce the following symptoms:

1) Over-secretion of hormones: the most common hormone overproduced is prolactin (in females, it causes breast discharge,
irregularity or lack of menstruation or infertility; in males, it causes lack of sex drive or impotence). Other hormones overproduced may be growth hormone (in adult, it causes big hands, feet and head, night sweats and in children, excessive height) and ACTH (It may cause weight gain, moon face and hypertension)

Assessment often includes assessment of hormonal status (by an endocrinologist) and vision (by an ophthalmologist).

If the tumour secretes prolactin (prolactinoma), often surgery is not needed. Treatment with drugs, bromocryptine or carbagoline, is often sufficient.

If the tumour is not a prolactinoma, surgery is often needed. It is often done through the nose (transphenoidal). A microscope and endoscope are used to help removal of the tumour.

Occasionally, if the tumour is very large or grows towards one side, an operation through the head may be needed (subfrontal approach). Sometimes when the tumour grows into the blood vessels towards the side (cavernous sinus) or if the tumour regrows, radiotherapy is an effective way to shrink and control the tumour in the long term.

This tumour originates from the nerve that controls balance (vestibular nerve). The vestibular nerve runs together with the hearing nerve (cochlear nerve) and the facial nerve which controls the facial muscles. Hearing loss is the most common problem and is often attributed wrongly to old age. If the tumour is less than 3 cm in diameter, radiosurgery (Gamma Knife) treatment is very effective in shrinking and controlling the tumour. If the tumour is larger than 3cm, surgery is often needed to remove the compression caused by the tumour on surrounding brain especially the brain stem. Preservation of the facial nerve is an important objective in this operation because most patients do not have any facial paralysis before the operation and facial paralysis is disfiguring. Intra-operative facial nerve monitoring is essential to achieve preservation of the facial nerve. In my experience, an ENT (Ear Nose and Throat) doctor (neuro-otolaryngologist) helps with the preservation by drilling the mastoid bone behind the ear to allow me to identify the facial nerve early. Sometimes a combined approach to surgically excise most of the tumour and radiate the small remnant attached to the facial nerve may give the best result.

These tumours are present at birth and, strictly speaking, are not tumours. Nevertheless, it grows like a tumour and can compress the surrounding brain causing blindness and headaches like a tumour. Complete excision is the aim of surgery. Otherwise, the tumour will recur and radiotherapy is not the ideal treatment for these non-tumourous conditions. Because these conditions are rare, it is important that the surgeon is experienced to be able to completely remove the tumour (Figure 4). 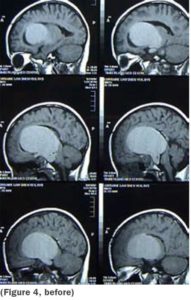 A 7 year old girl had 4 previous operations by 3 different neurosurgeons on her craniopharyngioma. The huge tumour took 17 hours to remove completely. There is no recurrence for 8 years. The child is attending normal school and tops her class.

Grade 1: a common example is pilocytic astrocytoma (Figure 5). This occurs mainly in children. One particularly common site is the hypothalamic area. The child often has problem with vision. Because the onset is gradual, the child often does not know the difference to be able to tell the parents.

A child with a pilocytic astrocytoma of the hypothalamus. A near total excision followed with Gamma Knife resulted in long term remission since 10 years ago.

Grade 2: this often occurs in young adults, presenting with epileptic fits. One problem with this tumour is that after a number of years, the low-grade tumour often transforms into higher grade tumour.

Grade 3 and Grade 4 are malignant Grade 4 tumours are also called glioblastoma multiforme
(GBM ). Unfortunately, GBM is the most common type of all gliomas (Figure 6).

Glioma may produce symptoms of

1) Headache, this type of headache sometimes occurs at night or early morning, waking the patients up.

3) Weakness or numbness of the limbs, blurred vision or mental dysfunction, depending on the location of the tumour.

A glioblastoma multiforme in a Caucasian man was removed. He lived for about 4 years before the tumour eventually caught up with him.

As the tumour is malignant, treatment often requires aggressive combination of surgery to remove the tumour, followed by both radiotherapy and chemotherapy. The best drug for chemotherapy nowadays is a new drug called temodal (temozolomide). It can be taken orally and does not need intravenous injection or infusion. In contrast to the older chemotherapy drugs, it has few side effects. In the past, the average survival after diagnosis was 40 weeks. Nowadays, with the combination of surgery, radiotherapy and chemotherapy, the survival rate has been improved and some patients may live up to 3-4 years (Figure 6).

These are cancerous tumours in the brain which originate from other sources such as breast or lung cancers. If they are large and near the surface, they may be removed easily by surgery. But most of the time, modern treatment with radiosurgery (Gamma Knife) is effective in controlling or getting rid of the tumours. This saves the patient the need for an operation. Sometimes biopsy of the primary tumour may be needed to be sure of the diagnosis if not already known.