There are 2 types of stroke:

1. Blockage of arteries resulting in damage to the brain (Ischemic stroke). This accounts for 80% of strokes. The blockage may be in the small blood vessels in the brain as is common in diabetic patients or in bigger vessels. Sometimes a dislodged blood clot from the major vessels in the nec (internal carotid artery) or even the heart may result in ischemic stroke. Therefore it is important
to find the cause of blockage.

2. Bleeding in the brain (hemorrhagic stroke). This accounts for 20% of stroke.
The causes of bleeding are

3) an arterio-venous malformation (AVM) in children, teens or young adults (Testimonial 5) or

4) Bleeding tendency as in patients on aspirin, ascardia, plavix or warfarin

1) drugs to thin the blood to avoid further blockage: anti-platelet agents such as aspirin,ascardia or plavix. Sometimes stronger drug such as warfarin may be needed.

Cholesterol: Among the different types of cholesterols in the blood, LDL is the most important one and one should aim to have LDL lower than 100mg/dL. If necessary, it is better to take medicine to lower the LDL rather than having it too high resulting in stroke in the future.

Diabetes and hypertension are usually quite easily controlled nowadays with many new drugs available. One common misconception is that when the blood glucose, blood pressure or cholesterol is well controlled, then one can stop the medication. The problem is that the glucose, blood pressure or cholesterol will rise again without medications and often without the patient knowing. These result in brain hemorrhage or stroke; then it becomes too late. Such medicine should be taken life-long. It is better to take the medicine and be healthy than not taking and suffering a stroke later.

For ischemic stroke, surgery may sometimes be needed if:

1. A large area of brain is damaged (cerebral infarction) and the brain swells up.Decompression may be needed to save the patient’s life, especially for younger patients.
2. A blockage of the artery in the neck (carotid stenosis) may need to be cleared (carotid endarterectomy, Figure 7). A new technique called stenting may also clear the blockage although the long-term result with stenting is slightly inferior to surgery. 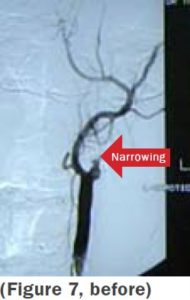 For bleeding in the brain, treatment is threefold:

2. Drainage of excessive brain water. Sometimes the bleeding may block the normal circulation of brain water, resulting in excessive water and increased pressure in the brain. A simple procedure to drain the water may save the patient’s life. A new method that I do is to place a long tunnel under the skin. This minimizes the risk of infection and the need to re-operate on the patient.

3. Treatment of underlying diseases which cause the bleeding.

For aneurysm (weak spot in the artery), either surgery to clip the aneurysm or a new method called GDC coiling of the aneurysm is needed. Coiling is a new method best carried out by an experienced interventional neuro-radiologist. It can save the patient an open surgery.Nevertheless, it is not suitable for every aneurysm, especially not the middle cerebral artery type of aneurysm.

For AVM, there are three methods to get rid of an AVM (Testimonial 5):

a. Surgery to remove the AVM (Newspaper 10).

b. Injection of glue or particles to block off the feeding artery into the AVM

For difficult cases a combination of methods is sometimes needed (Figure 8). 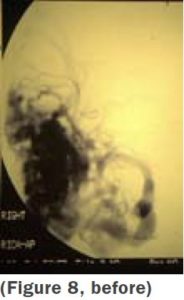 Narrowing of the internal carotid artery before and after removal of the plaque. Routine use of a shunt during clamping of the artery makes the operation safer.

A 30 year old Singaporean man with a huge AVM had a previous attempt in another hospital to remove it but failed. I asked my interventional neuroradiologist to cut down the blood flow (embolisation) before removing the AVM completely. The operation took 28 hours and the patient is neurologically normal and working.